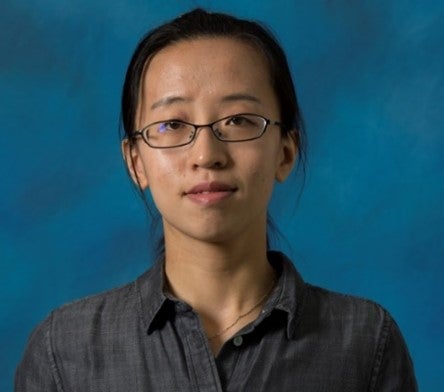 Her research is on the mathematical analysis of partial differential equations arising in fluid dynamics and biophysics/biology.  In particular, she focuses on the systematic study of active flows of liquid crystals driven by stochastic forces. During the Mellon Fellowship year, she plans to investigate how the random noise affects the stability of liquid crystals.

Predictive Numerics for Fluid in Potion

Project 1: Data Driven Modelling. It is an era where computational tests, based on fundamental science, are pushing the scales (of investigation) and complexities (of interactions) far beyond what can be studied in physical (wet-lab) experiments. In this period, it is hard to imagine an application area that research in data driven methods, like Kiera’s, will not touch. All previous related work in fluids has assumed knowledge of “snap-shots” (velocity distributions) and neglects how these are to be obtained. Collecting velocity data of laminar flow through a glass tube in a laboratory requires millions of dollars’ worth of complex equipment. It is impossible to do in a nuclear reactor, in underground flow, in flow around an aircraft during maneuvering flight and so on. On the other hand, a pressure sender costs about 5$ and is easily installed. Thus, the problem the whole field has ignored (due to difficulty) of pressure recovery is the essential one for this branch of data science to have an impact on human life! This is Kiera’s first project.

Project 2: The Prandtl-Kolmogorov 1 equation model of turbulence. This project addresses one of the deepest problems of partial differential equations connected to one of great practical impact: the non-vanishing of the energy dissipation rate at high Reynolds numbers in turbulence as well as in predictive models of turbulence. This non-vanishing is considered one of the 4 fundamental experimental laws of turbulence. Her work reconsiders the turbulence model of Prandtl-Kolmogorov (the dynamic core of predictive models). It leads to the problem of specifying the model’s turbulence length scale, the dynamic analog of mean free pass in kinetic theory. She studies a kinematic specification zooming in on the near wall behavior, recognized as the harder problem since the famous paper of Kato on transition of NSE to Euler solutions as Re → infinity. This is addressed for the Prandtl-Kolmogorov model now in Kiera’s work.

Project 3: Self-adaptive penalty methods.  Kiera is also involved in a research project with several other PhD students developing new methods that are minimal in computational, cognitive and space complexity. However, their accuracy has high sensitivity to the exact pre-specification of the penalty parameter and, so far, no acceptable one has been found. They are developing methods where the algorithms act as an expert system to choose its own parameter optimally. This vision of treating penalty as control parameter goes back to von Neumann’s idea that “sensitivity makes prediction hard but control easy”.

The Reinhardt Conjecture and the Formal Foundations of Optimal Control

During his time at the University of Pittsburgh, Koundinya Vajjha has completed two prestigious summer internships: one at Oracle Labs in Boston and the other at the MIT-IBM Watson Lab for Artificial Intelligence.

In recent years, algorithms in machine learning and artificial intelligence have found many applications throughout society. In situations where lives are at stake, it is vital for these algorithms to operate without mishap.  Koundinya Vajjha is at the forefront of the formal verification of learning algorithms, which is a certification according to the highest standards of mathematical rigor.

In his research for the Mellon Fellowship, Koundinya Vajjha is making important progress towards the solution of a major conjecture in geometry that has remained unsolved for nearly ninety years.  He is using optimal control theory to understand how to design the most economic shape of a coin.