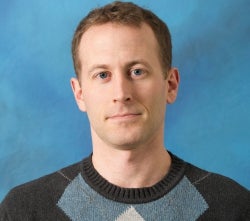 My research focus is in topology, which roughly speaking is “the study of shapes.” Those I study most closely are 3-dimensional manifolds, which at small scales look like the 3-dimensional space we are all used to, though at global scales they can have more structure. Imagine taking a cube and identifying each of its faces with the one opposite (you would need an extra dimension to perform these identifications extrinsically) — this is a 3-manifold often called the “3-torus.’’ While topologists usually consider spaces up to a notion of equivalence called homeomorphism, which allows shapes to be stretched or smooshed arbitrarily (though without tearing them), the “geometrization theorem” famously proved by Perelman in the early 2000’s allows 3-manifolds to be studied using much more rigid geometric structures. My own work exploits this, in particular often using hyperbolic geometry, the non-Euclidean geometry with multiple parallels to a given straight line through a given point. This is in some sense the “predominant” geometry among 3-manifolds.

Some of my recent projects have studied sphere packings in hyperbolic geometry, volumes of hyperbolic 3-manifolds, and hyperbolic 3-manifolds that decompose into right-angled polyhedra. I have pursued side interests on Delaunay mesh refinement and inscribed hyperbolic polygons in undergraduate research projects, and I have graduated three PhD students. I brought an NSF grant with me when I arrived and have since been funded by Pitt’s CRDF (Central Research Development Funds).