The Sixteenth Annual Pitt Integration Bee took place this year in Alumni Hall's 3rd floor Integration Hub.  33 Pitt undergraduates competed, with 10 making it through two rounds of integration to go head to head in the lightning rounds.  These finalists were first faced with the integral of (cos(x)-x ln(x) sin(x))/x. This problem reduced the pool to 5 prize winners, who raced through some high-speed integration by parts to tackle the integral of (ln(x))^2 and determine their ranking.

And, without further ado:  The 2016 INTEGRATION CHAMPION and recipient of the coveted 2016 Integration Champ T-shirt is KOSTYA BORISOV, who had won the High School Integration Bee several years ago but had never before won the Undergraduate version.  The second place finisher was TIANTIAN LIU, while in third place was MARK MICHALKO.  Rounding out the prize-winners were DEREK ORR (the champion from the previous two years) and WILLIAM MAHER.  All of these winners shared $200 in book store certificates, generously donated by the Honors College, as a reward for their integration performance. Congratulations to all of them, and to all of the competitors, who showed impressive integration talent!

New this year:  While the Integration Champ T-shirt is one-of-a-kind, you can order your own non-Champ version online here.  The design is based on the fliers that have been hanging around Thackeray since Spring Break (unfortunately, proceeds do not benefit the Math Dept or anyone else at Pitt).

THANK YOU to everyone who participated in this event in any way!!! It was great to have such enthusiastic contestants and audience members, who added to the atmosphere and, in some cases, walked away with top-notch door prizes. This event was made possible due to the volunteer efforts of graduate students JEREMY HARRIS, BEN LETSON, JAKE MIRRA, SHELBY STANHOPE, and GLENN YOUNG, the earlier help of THOMAS EVEREST, the attendance and participation as lifelines of ANGELA ATHANAS, IVANKA NIKOLOVA, and INNA SYSOEVA, the recruiting efforts of many TAs and faculty members, and the equipment help of RICHARD MISURA.  Finally, as always, thanks  to the Honors College and Math Department for funding this competition!

The Spring 2016 BIG Problems class spent the semester attempting to answer "Can college statistics be used to predict Major League Baseball success?" for a Major League Baseball organization.  The students worked with data on 17,000 college players and draft data over a 5 year period, provided an answer, and even dug further and analyzed potential bias in the way MLB teams draft.  In addition to big data, computer science, mathematical and statistical skills, the students learned to work with a liaison from the organization to properly understand the problem and with other BIG liaisons from local industries to perfect their presentation. This included the opportunity to present to a liaison and his colleagues in a boardroom of a large Pittsburgh company.  Their efforts culminated with a presentation to about 15 representatives from the MLB organization. To see the presentations click here.

This was the second year the Department of Mathematics was invited to participate in the Mathematical Association of America's PIC Math program.
As one of the 50 schools involved in the NSF-funded program the work was submitted for a team competition and the students are invited to present at the 2016 MAA MathFest this August in Columbus, Ohio. 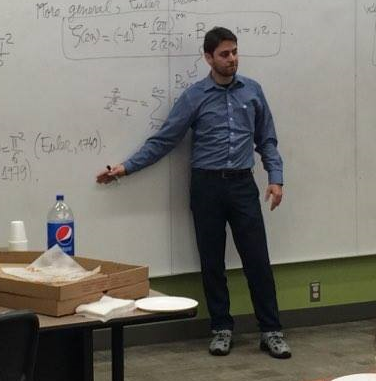 The math club has had a very active year.  They meet every Monday.  Each week features a different subject and often a guest speaker. This year Pi Day happened to fall on a Monday and the club celebrated with all sorts of pies.  Cezar Lupu came to Math Club on April 4th, 2016, and discussed some new findings on the Riemann zeta function for zeta = 3. He also discussed the celebrated Euler series as well as Apery's constant.