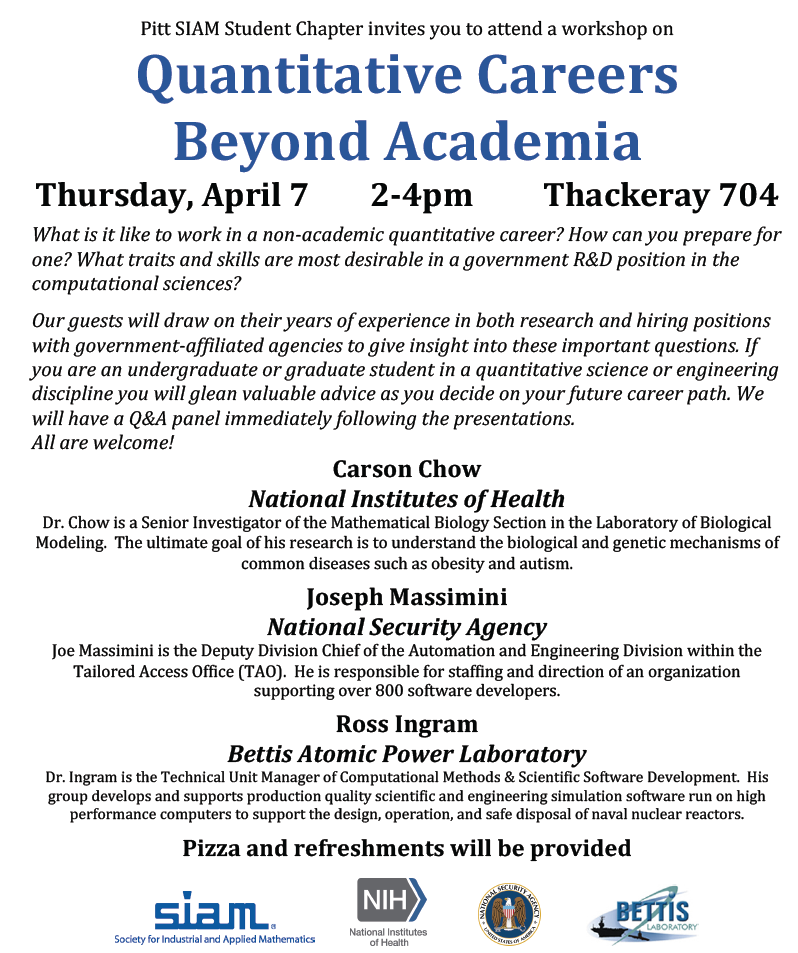 Although today's workforce values strong mathematical backgrounds, many undergraduate and graduate students are unsure how they may turn their rigorous training into a satisfying non-academic job. We may not even know what non-academic technical jobs entail, let alone how to prepare and be competitive for them.

The careers workshop, held on April 7, 2016, addressed these issues by having speakers discuss their experiences and give advice from their perspectives both in technical and managerial positions. Our guests all had Pitt connections: Ross Ingram received his Ph.D. under Bill Layton, Carson Chow is a former faculty member in our department, and Joe Massimini received his bachelor’s from the C.S. department. We finished off with a dynamic Q&A session, with the panel ably fielding questions from the many undergraduates and graduates in attendance.

We’d like to thank our guests, the department, and our audience for helping us put together a very successful event.

The International Mathematical Olympiad (IMO) is the World Championship Mathematics Competition for High School students and is held annually in a different host country. The first IMO was held in 1959 in Romania, with seven countries participating. Today more than 100 countries from six continents participate.  In 2015, United States's Team came in first place. The last time this happened was in 1994.

The University of Pittsburgh made its contribution to the preparation of the IMO team through the activities of our graduate students Cezar Lupu and Irina-Roxana Popescu. During June and July, Cezar and Roxana delivered eight lectures at the preparation camp  Mathematical Olympiad Summer Program directed by the Mathematical Association of America whic was held at Carnegie Mellon University, Pittsburgh between June 7-July 1 and it was run by Professor Po-Shen Loh of Carnegie Mellon University who served as the US team leader for the IMO with the help of last year’s deputy leader Razvan Gelca of Texas Tech University. More details about this camp are here.

The prize is awarded annually for the best doctoral dissertation written by a graduate student in mathematics at the University of Pittsburgh. Dr. Morait's dissertation treats the fully evolutionary Stokes-Darcy problem and its quasi-static approximation. This award recognizes the work that resolves the quasi-static limit of the fully evolutionary model of coupled ground water – surface water flow, showing  when the quasi-static assumption is valid. We are pleased that a chapter of this thesis, which was published as a separate paper, was recognized with a SIAM student prize.

The prize has been made possible by a generous gift to the University of Pittsburgh from the Beckham Foundation.

We are pleased to report that Pamela Fiordilino has been awarded a Dietrich School of Arts and Sciences Diversity Fellowship for Graduate Summer Research to assist in her research on stick-stepping behavior in the summer of 2016.

The research will focus on central pattern generators (CPGs) for locomotion. CPGs are small neural circuits that generate the rhythms underlying automated, repetitive behaviors, such as breathing, chewing, and walking. We will analyze the relative roles of sensory signals and top-down commands in limb segment control during stick insect stepping behaviors and consider the behavior of this network when subject to a periodic applied drive, representing signals from depressor muscles during stepping. Each component of limb segment is modeled as a small system of ordinary differential equations that describe the changes in membrane potential that underlie neural signaling as well as terms representing the synaptic signals from other neurons within the circuit and the drive from other muscles and top-down control (outside the circuit).

My current research project is devoted to the mathematical study of nonlinear partial differential equations arising in  fluid dynamics and related areas, such as active hydrodynamics and turbulence. More>

The Arts & Sciences GSO Elizabeth Baranger Teaching Awards acknowledge excellence in graduate student teaching across the Arts & Sciences. Awards are presented to students nominated by faculty, fellow graduate students, and undergraduates, in each of the Social Sciences, Natural Sciences, and Humanities. The award, which is given in April, is named after Elizabeth Baranger, former Dean and, later, Vice-Provost for Graduate Studies.