In this issue of By the Numb3rs you can read about recent developments in the Department as well as some accomplishments by our students and faculty.  We are pleased to announce that Dr. Thomas Hales has completed the Flyspeck project, which has constructed a formal proof of the Kepler conjecture.  The Kepler conjecture asserts that no packing of congruent balls in Euclidean 3-space has density greater than the face-centered cubic packing. It was the oldest open problem in discrete geometry.

We are delighted to announce that five new research grants have been awarded to the Department of Mathematics.

Joseph Fiordelino, one of our graduate students, has been awarded a SMART Scholarship, from the Department of Defense.  Dr. John Chadam and the Actuarial Club hosted the First Annual University of Pittsburgh Actuarial Career Fair.  Dr. Jeff Wheeler is working hard to create exciting opportunities for our undergraduates.  He has developed a new course that involves students teaming together to address problems obtained from Business, Industry, and Government (BIG).

In our alumni section we are excited to announce that Vineet Raghu is the first graduate of the Department of Mathematics new Mathematical Biology major. Carey Caginalp, who earned a Bachelor of Philosophy in Mathematics, shares his experience at the University of Pittsburgh.

This term we are hosting a Theme Semester on Discrete Networks: Geometry, Dynamics and Applications Seminar, funded by the Mathematics Research Center at the University of Pittsburgh and the National Science Foundation. In the spring term we will be hosting the workshop "International Conference on PDEs and Free Boundary Problems”.

A computer-verified proof of a 400-year-old problem could pave the way for a new era of mathematics, in which machines do the grunt work and leave humans free for deeper thinking.

The problem is a puzzle familiar to greengrocers everywhere: what is the best way to stack a collection of spherical objects, such as a display of oranges for sale? In 1611 Johannes Kepler suggested that a pyramid arrangement was the most efficient, but couldn't prove it. Read More

Hosted at the University of Pittsburgh, Department of Mathematics by professors Brent Doiron, Bard Ermentrout, Marta Lewicka and Jonathan Rubin:

The goal of the Semester is to expose graduate students, visitors and faculty to a variety of research directions involving discrete geometrical structures, networks, and dynamics of such. In a nutshell, these directions can be summarized as:
•    Morphogenesis of Discrete Structures: How do discrete structures achieve their shapes? How do they themselves evolve over time?
•    Dynamics on Networks: How do network features influence emergent dynamics of connected collections of dynamic nodes?
•    Dynamic Networks: What happens when the nodes have time-dependent states and the network itself is also evolving?
The semester will consist of concentrated activities, including five mini-courses at graduate level, delivered by: I. Belykh, D. Burago, R. Connelly, L. Deville and M. Newman.

A network is a very general concept, encompassing any structure that can be represented as a collection of discrete nodes, some of which are joined by links called edges. An extremely broad variety of systems can be represented as networks; these range from man-made constructs such as power grids, the internet, and rigid structures, to abstract entities such as social interaction and disease contact networks, to biological systems such as neuronal or genetic networks. Mathematical and computational tools being developed to analyze such networks offer great potential for impact, given that the same mathematical framework can be used to represent such a wide diversity of systems.

This three-day workshop will provide a forum for the exchange of ideas relating to quantitative research about networks, pursued with a variety of perspectives and approaches. The event will bring together leading researchers in the field, with backgrounds in areas such as applied mathematics, mathematical biology, statistical physics, and computational methods, along with a diverse pool of graduate students, postdocs, and other scientists who are early in their careers. By doing so, it will highlight cutting edge advances in the analysis of network dynamics and structures, it will foster connections across mathematical areas and disciplines, and it will promote the involvement of junior researchers in the field.

Funding for this theme semester and workshop has been generously supported by the National Science Foundation under Grant NSF:DMS 1446452 and from the Math Research Fund,  from the Kenneth P. Dietrich School of Arts and Sciences at University of Pittsburgh. 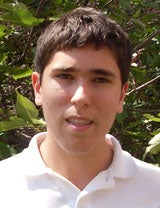 In April 2011, Carey Caginalp received his Bachelor of Philosophy in Mathematics degree which requires a rigorous program of study approved by the Honors College and the completion of a thesis that is approved by a committee of faculty members, one of whom is outside of the department. With his thesis advisor, Prof. Xinfu Chen, Carey published two papers in top journals, Comptes Rendus and the Archive for Rational Mechanics and Analysis, on the
problem of the escape of a particle moving randomly in a domain. Carey says, "The University of Pittsburgh Math Department gave me a wonderful opportunity to explore a broad range of mathematical subjects.  I was able to take courses at various levels that were right for me.  I had many excellent mathematicians and teachers to guide me through my studies." Carey's research was supported by a Brackenridge Fellowship award that he received in April 2010. He also received the Culver Award in Mathematics in April 2010.

Carey received in 2011 a National Science Foundation award for graduate study which he chose to use at Brown University's renowned Applied Mathematics program starting in September 2011. He received his Master's degree and is currently working on his PhD thesis on topics related to stochastic processes within nonlinear hyperbolic differential equations. At Brown, he also served as a Teaching Assistant for two semesters and taught Methods of Applied Mathematics. He has also published another paper related to white noise in multi-stable dynamics with Xinfu Chen and others. Carey has given several lectures at national meetings, including the Society for Industrial and Applied Mathematics, Carnegie-Mellon Workshop on Modeling of Materials with Fine Structure, the American Institute of Mathematics, and (planned for March 2015) American Mathematical Society.